In the beginning, we can know the basic knowledge about masterbatch. Masterbatch is a solid plastic additive which is commonly used to colour plastics or to impart additional qualities to plastics. In addition, a masterbatch is a concentrated mixture of pigments or additives encapsulated in a carrier resin during a heat process. After that, it will be cooled and chopped into a granular shape like the granula masterbatch. Masterbatches make the processor colour raw polymer in a cost-effective manner during the plastics process.

There are several alternatives to using masterbatch like special effect masterbatches such as purchasing a completely compounded substance or compounding from raw materials on site. When compared to pure pigments, masterbatches require greater storage space and have longer lead times. The carrier and the additive are subjected to more heat exposure. 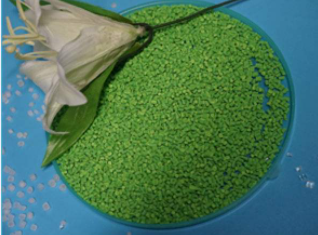 The use of masterbatches like optical brightener masterbatch can decrease the problems associated with additive or colorant clumping or insufficient dispersion. When it comes to additives masterbatch, the concentration is higher than in the final polymer. Sometimes, their application is comparable to that of other substances, which are mainly used to add alloying elements to steel.

The masterbatches like flame retardant masterbatch can be quite concentrated. For instance, 25 kg plastic film bags can be used for one tonne of natural polymer. As masterbatches are relatively dilute, compared with raw additives, they can be precise in dosing small amounts of pricey components. Because solid masterbatches such as solid color masterbatches are solvent-free, they have a longer shelf life since the solvent does not evaporate with time passing by.

Masterbatch has plenty of advantages for plastic products. First, a masterbatch is capable of enhancing the production concerning the volume. Second, on account of the increased film physical qualities, it can be used to downgauge. Third, because of the high CaCO3 specific heat of the component, masterbatch can also help plastic masterbatch producers decrease material costs by using less energy to power the machine. Finally, masterbatch can help the plastic improve a lot of physical properties like higher toughness, flexural stiffness, adhesion, and printability.