You are here: Home » News » Industry Information » How to deal with uneven dispersion of masterbatch?

How to deal with uneven dispersion of masterbatch?

Although the black masterbatch will be wetted by a wetting agent during the production process, so that the masterbatch can be finally shaped, this does not mean that the finished masterbatch also needs a moist environment. On the contrary, if the oyster is in a humid environment or is relatively moist, it will melt in the mouth to a certain extent, but the inside is still dry, which will make the masterbatch squeeze in a certain space and cannot perform normal mixing and dispersion. . Therefore, it must be kept relatively dry when adding masterbatch to production. Dry materials are easier to enter than wet materials. 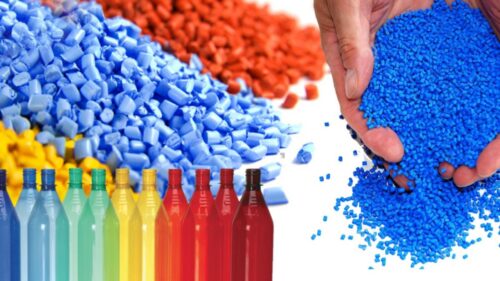 Second, the temperature of the discharge port will also affect the dispersibility of the black masterbatch. Lowering the temperature here allows the black masterbatch to go directly into the mixing, instead of showing a melted state in the first place. It should be noted that in this case, the driving force of the oysters is mainly the screw rod rather than the heat. This means that the screw rod will be in a relatively high-load working state, so the damage to the screw is relatively large.

Third, when mixing, you can refer to the logic of small front and large back, that is, to reduce the diameter of the front section. We suggest that you can use some screws to connect, and reduce the diameter of the front section appropriately, so that the gap in the rear section after entering is too large, and it is also convenient for the entry of materials.

Fifth, replace the motor board. Change the diameter of the turntable so that the screw speed is fast, and the material is stirred evenly before dissolving. The disadvantage is that the screws are easy to break. After the speed is fast, the temperature of the rear heating zone should be increased, otherwise the back force of the screw will be too large.

If your production equipment is extremely efficient and can withstand mass production, then the ratio of 1:100 can achieve the greatest efficiency, but this ratio is likely to cause uneven dispersion of the masterbatch. 1:50 is used for plastic products with general coloring requirements. PE and PP color masterbatches use this ratio more. 1:20 is used for advanced plastic products, including PO and ABS, which can be widely used in injection molding, blow molding, spinning and other processes.